by Brion O'Connor
Prev NEXT
5 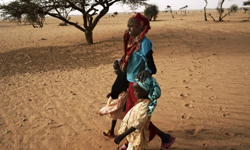 Sudanese refugees wait for permission to join a refugee camp in Bahai, Chad. Civil war in the region has forced hundreds of thousands of people from their homes.
Marco Di Lauro/Getty Images

Civil war in developing countries is a grim impediment to humanitarian aid. Infighting between warring factions can be so vicious that the very act of delivering necessary supplies -- food, clothing, medical and building materials -- can be a life-threatening proposition. According to a recent report issued by the London-based Overseas Development Institute, an average of 95 foreign aid workers were killed in each of the past three years, up from about 66 each year between 2003 and 2006 [source: Humanitarian Policy Group]. In one particularly brutal attack in August 2010, 10 members of a medical team sponsored by the Christian-based International Assistance Mission -- including six Americans -- were massacred in Afghanistan [source: Associated Press].

The rate of kidnappings of aid workers is also skyrocketing, climbing from about 18 a year between 2003 and 2006, to roughly 57 a year since 2007. Afghanistan, Sudan's Dafur region and Somalia account for 60 percent of the attacks, while Chad, Sri Lanka, Pakistan and Iraq also pose significant threats. In March 2009, five aid workers in Darfur were kidnapped from a Médicins Sans Frontières compound after the International Criminal Court indicted Sudan's President Omar al-Bashir on war crimes. All were later released, but the action was chilling [source: Walt].

Another stark reality of philanthropic efforts is that even the best intentions can be waylaid if aid falls into the wrong hands. Over the years, humanitarian aid has even come under fire as a political tool, used to wield influence in a relentless power struggle between governments, guerillas, tribes and clans.