by Brion O'Connor
Prev NEXT
6

The Gulf of Mexico Oil Spill 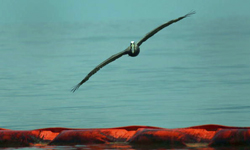 A pelican flies over an oil slick boom in Grand Isle, La., following the Deepwater Horizon oil spill in 2010. Protecting affected wildlife was one of the goals of the humanitarian workers who came to help.
Spencer Platt/Getty Images

The 2010 BP oil spill in the Gulf of Mexico is a man-made disaster of unequaled proportion, surpassing even the Exxon Valdez disaster of 1989, and will likely have an impact for generations. Even conservative government estimates peg the spill at more than 4.9 million barrels of oil [source: Robertson and Krauss]. The spill not only threatens the marine ecosystems and birdlife for thousands of square miles, but potentially the region's food chain and many Gulf Coast businesses [source: Associated Press]. With so many conflicting reports, some organizations, such as Greenpeace, have launched independent investigations to better understand the scope on this catastrophe.

Donations can be targeted to protecting threatened wildlife, the recovery of tarnished ecosystems or assisting area economies. Some organizations that provide broad environmental support include Greenpeace, EarthShare, Oceana North America and the Center for Biological Diversity. Among the leading agencies focusing on wildlife affected by the oil spill are the Nature Conservancy, the Audubon Nature Institute and the American Bird Conservancy. A different, but equally effective tack is to support Earthjustice, a non-profit public interest law firm first founded in 1971 as the Sierra Club Legal Defense Fund, which has challenged several government assertions regarding the spill in court. Local charities assisting businesses and residents include Catholic Charities, Second Harvest Food Bank of Greater New Orleans and Acadiana, and the Greater New Orleans Foundation.