by Brion O'Connor
Prev NEXT
9 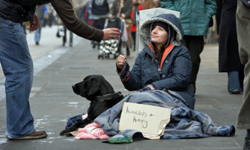 Hard economic times may encourage people in the developed world to seek the help of others.
BananaStock/Thinkstock

Not all humanitarian aid targets Third World countries. The ongoing global economic crisis has families in many developed countries reeling. Despite the almost comical number of TV ads promoting individual bailouts, for many the debt problem is real and severe. Those living on extended credit can rarely afford to lose their jobs. If unemployment hits home, the threat of foreclosure or medical emergencies can translate into a downward spiral that leads directly to poverty. In colder climates, that can mean choosing between food and heat.

Most aid missions addressing poverty in the United States are locally based. Among the most highly rated by Charity Navigator are the Central Dallas Ministries in Texas, the Dollar Energy Fund in Pittsburgh, Penn., the Heat and Warmth Fund in Detroit and the Society of St. Vincent de Paul in Portland, Ore.

Abroad, the International Federation of Red Cross and Red Crescent Societies is actually a compilation of 186 organizations that deliver significant aid in the event of a crisis. Although the group's stated focus is disaster relief, its overriding goal is to "improve the lives of vulnerable people by mobilizing the power of humanity" through promoting humanitarian principles, public education for better preparedness and supplementing youth activities. Another preeminent player in the field is the World Bank. This worldwide organization, which is "working for a world free of poverty," has contributed roughly $40 billion in disaster management in 500 operations since 1980 [source: the World Bank].